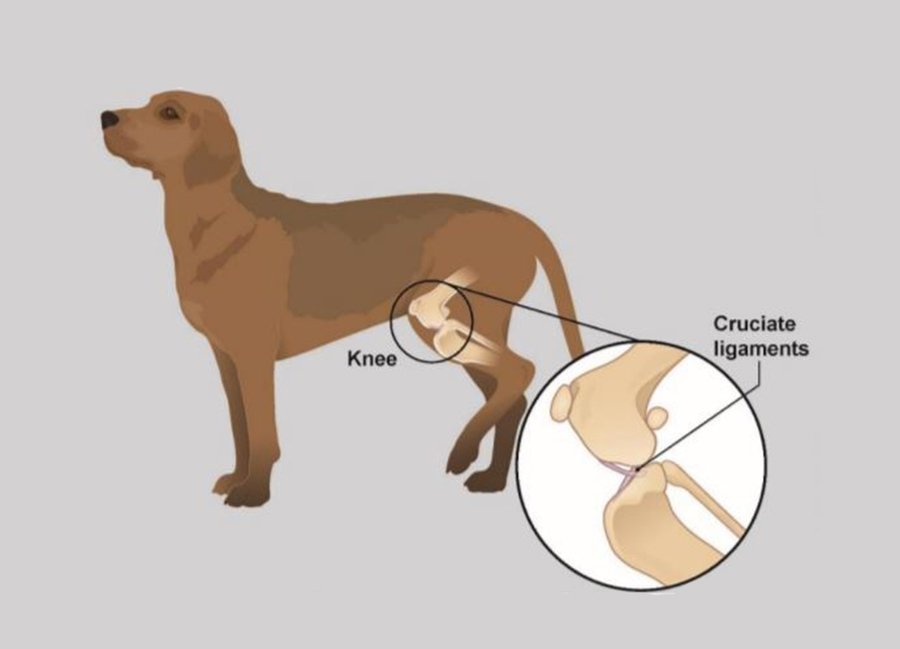 ACL stands for Anterior Cruciate Ligament. The ACL is the main ligament that connects the femur to the tibia, or thighbone to the shinbone. The main role of the ACL is to help give stability to a dog’s knee. When the ACL, or Cranial Cruciate Ligament (CCL) as it is also referred to in animals, is torn, the knee can suffer further injury in addition to surrounding tissues, cartilage (often contributing to arthritis), etc.

A complete tear is very painful and will probably lead to lameness. The tibia is allowed to move freely underneath the femur, each movement outside of normal potentially causing more damage.

Causes of a Torn ACL 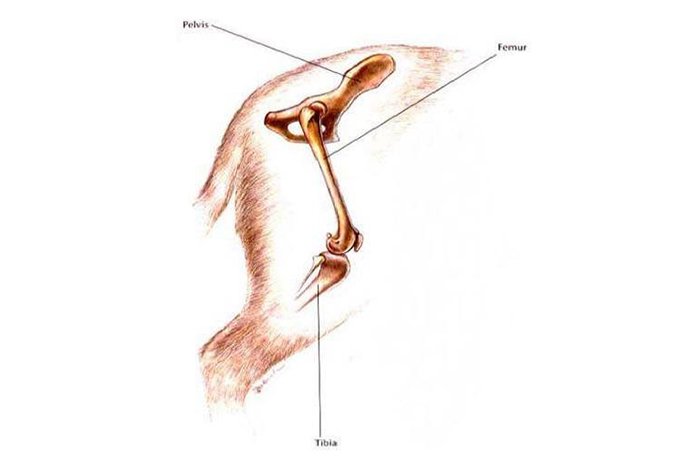 Excessive internal rotation of the tibia during joint flexion (extreme joint rotation when the knee is bent) is the most common cause of an ACL rupture, but any sort of trauma to the knee joint (stifle in dogs) can damage the ACL.

The joint can become injured when a dog is running and suddenly changes direction, resting most of the animal’s body weight on a joint held (stifle) together by a series of ligaments. This is a common injury in athletic dogs.

Progressive ‘degeneration’ (weakening) of the joint and ligaments over time can lead to injury. For example, a minor tear could heal without the handler ever noticing, but repeated minor injuries increase the likelihood of a major tear.

Obese dogs are at far greater risk for ACL (CCL) injuries, or any joint-related injury since those joints are forced to bear the weight they weren’t meant to every single day.

CCL stands for ‘Cranial Cruciate Ligament’ and is actually the exact same as a human ACL only reserved for dogs and other animals.

Medical terminology is like a whole new language, each root term along with prefix and suffix meaning something. Anterior means ‘toward the front’, while posterior would be back and lateral side. Portions of the anatomy are named after their locations so a medical professional would know exactly where they are even if that professional may not be familiar with that anatomy.

The ‘Cranial’ portion of the CCL refers to ‘head’. In most cases, that would refer to the skull or cranium, but this time probably refers to the head of the femur (which the ACL or CCL happens to originate). A ‘head’ of a long bone is either, larger end that articulates with other bones within a joint.

Cruciate means ‘cross-shaped’, both cruciate ligaments forming a cross. Notice how every part of the Anterior Cruciate Ligament has a meaning.

“A ruptured CCL or ACL is one of the most common knee injuries for dogs (Vail Valley Animal Hospital).” The symptoms themselves make perfect sense and could be exactly what you would expect after reading the rest of this article.

Treatment Options for a Torn ACL in Dogs

Treatment will depend on the severity of the injury. A mild strain might only require rest, while a complete tear or rupture requires surgery. If a full rupture isn’t treated surgically, it will eventually lead to more damage to another anatomy within the dog’s knee and could lead to much worse outcomes.

Most dogs that suffer a mild ACL (CCL) tear and aren’t treated will eventually suffer a full tear within weeks or months, making early medical treatment important. Many times, this just involves resting the limb, ‘taking it easy’.

Surgery is usually an option for extreme cases.

Surgery (especially the second two options below) is drastic and an extreme option meant for extreme situations. It’s important to understand a dog simply shouldn’t, and in many cases aren’t able to, walk on a limb suffering from a full-thickness tear (the ligament has torn completely away from the bone, or torn in half).

This is the oldest surgical method for cruciate injuries in dogs, whereby the joint is stabilized outside of the joint-capsule. An artificial ligament made of special sutures is wrapped from the back to the front of the knee joint, offering joint stability.

The relationship and angle of the tibia and femur are surgically altered, decreasing the shift due to lack of stability. The tibia is rotated and a bone plate is inserted, allowing healing. Surface realignment provides stability, but the anatomy of the stifle joint is permanently altered.

The top of the tibia is cut and moved forward. The end result of this surgery causes the pulling force of the quadriceps and attaching tendons to help provide stability.

A full ACL rupture is very unlikely to heal properly at home without any kind of medical attention, so there really is no way to ethically advise at-home treatment. Every time your dog bears weight on the injury at all, it could become worse and not better, causing more injury to cartilage, other ligaments, even the bones themselves and usually leading to arthritis. The joint doesn’t necessarily even need to bend to cause further damage.

You don’t necessarily have to opt for surgery, but it is always important to at least get the injury assessed so you know your options.

An orthopedic brace can act like a cast, preventing any bending of the dog’s knee. Since the ACL is torn, that cast will give the stability the dog needs so his knee isn’t bending in strange directions. Acupuncture, supplementation (fish oil, glucosamine), messages, or swimming can aid in recovery, but shouldn’t be relied on as a sole treatment.

Let’s say your dog suffers a mild tear, and can still bear weight but seems to be walking funny (usually the case). It doesn’t seem like he’s in any kind of pain at all. Mild tears usually don’t require surgery, but you ideally should seek a veterinarian’s evaluation to determine the exact extent of the damage. In the meantime consider a brace to prevent any excess movement.

Your dog needs rest during his recovery. Avoid any kind of running, jumping, or play. Remember to stabilize that joint, just as if a human would their own.

Let’s say this is a younger large or medium breed, about three years old. He suffered a complete rupture and needed surgery. Immediately post-surgery, the limb will be immobilized in a brace until sutures are removed.

Skin sutures at the surgical site might be removed about two weeks later, the dog wearing a ‘cone’ during this time so as not to interfere (lick at) the sutures. In the meantime, the dog will be resting, with no extensive play, running, or jumping.

Your dog might start using the limb a little more over the next 4-6 weeks. Any exercise will be limited for the next 8-12 weeks, depending on the veterinarian’s orders.

During this time, the muscles can begin to atrophy from lack of use, so your veterinarian will send you home with specific exercises to perform with your dog, keeping those muscles strong (sort of). Tendons might also tighten (making it difficult for the dog to move properly), so these exercises will be meant to maintain range of motion.

Very short (about 5 minutes) walks will begin around the first week to maintain mobility. The frequency will increase with the following weeks, up to 30-40 minutes at a time around week 12. Your dog would have nearly finished healing around that time, but still may be weak.

Unfortunately, arthritis is an unavoidable outcome in many situations, surgery or not (though surgery may help slow it).

Neurons located within the tendons, muscles, and joints that send signals to the brain telling it where the body is ‘in space’. If some of those neurons are damaged along with injury, they don’t re-grow and the animal is more likely to injure himself in the future. The same is true for humans. Therefore if your dog suffers a ruptured ACL it is important to seek medical advice.

How do dogs get ringworm?