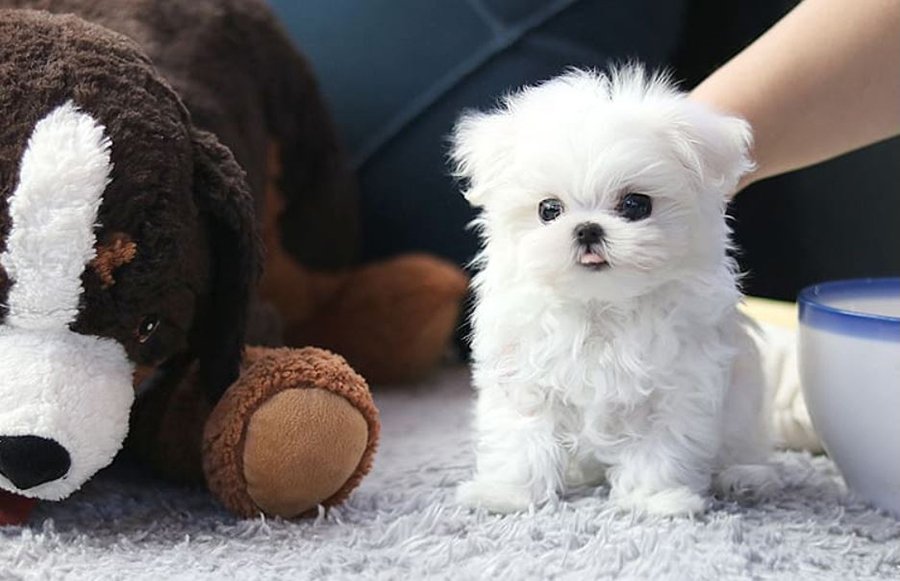 Who knew such an adorable, zestful dog could come in such a small package? With their cheerful personalities, these little ones take the idea of ‘Larger than Life’ literally!

What is a Teacup Maltese?

The Maltese himself is one of the oldest breeds still in existence, named after the Mediterranean island of Malta (around 60 miles from Sicily, middle of the Mediterranean Sea). The little ones have existed for nearly (or more than) three thousand years! In fact, they are so old no records exist chronicling the exact history.

The Maltese were very popular among the Roman aristocracy. After Rome eventually fell, Chinese breeders. These breeders further crossed the Maltese with their own toy breeds, perhaps giving us a different Maltese today than the original.

The Teacup Maltese is an even smaller version of the toy breed, weighing in at around 4 pounds! By crossing Spaniels and Miniature Poodles with an existing line of Maltese, 17-18th century breeders were able to create this miniature variant.

Some use the word ‘teacup’ and ‘toy’ interchangeably, but the Maltese himself weighs in between 4-6 pounds and is already a toy breed (AKC Breed Standard). The ‘Teacup’ version is said to be smaller, though at 3-5 pounds he may be the same or only slightly smaller. 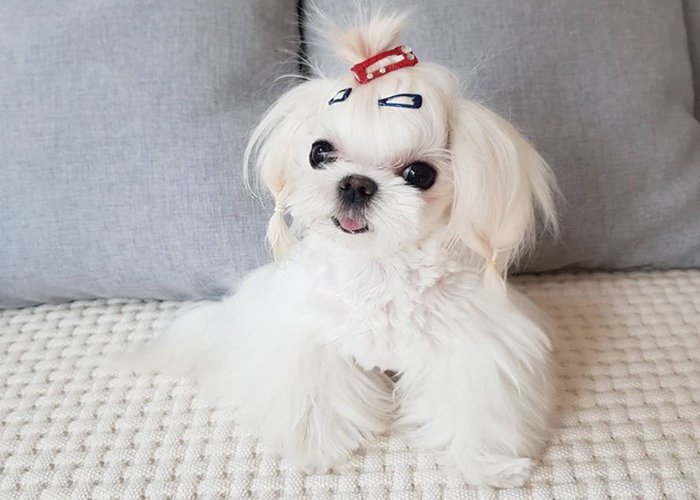 Not only is this little guy gentle and affectionate, he also loves spending time with his human! Treat him well, and you’ll always find a happy companion who is always eager to play.

They absolutely adore their human caretaker/s! In the eyes of your miniature Maltese, you can’t do anything wrong. They are the very epidemy of the idea behind lapdogs, and will be happier the more attention you offer!

Because they are so small, these dogs don’t require too much exercise. They are easy to care for and will be happy to receive the general enrichment all dogs should get.

Though he can be noisy and is known to bark, he’s not intimidating, won’t destroy your home, and will get along with neighbors (as long as he is properly socialized).

Because they are so small, a Teacup Maltese could theoretically spend his life in one room, as long as he had the companionship of a loving human and plenty of mental stimulation. Because even they need some physical activity, we don’t recommend life in that room.

You can take your little one almost anywhere you go!

Not Overly Demanding, Not Good Alone

While the tiny dogs aren’t very demanding for the average handler, they were originally bred (we believe) to be in constant contact with their humans. This is at least true for the teacup variant. Your Teacup Maltese is extra susceptible to separation anxiety.

At 3-5 pounds, your kitten probably weighs more than a Teacup Maltese! Even a shortfall could fracture a bone. There are many ways an animal this small living in a world of 150 lb. humans (more or less), with furniture and other objects made for those humans, can hurt himself.

Purebred/pedigree dogs already tend to come from a limited gene pool, even more so when a breeder is seeking very specific traits. While reputable breeders have access to gene sequencing technology that will identify any health defects, those that don’t are taking a large risk.

When you consider the lack of physical activity associated with small or toy breeds, they are also prone to weight gain and any associated medical complication.

Not Recommended for Young Children

Because he is so delicate and easily injured, the Teacup Maltese isn’t recommended to be raised around any child that wouldn’t be capable of the right amount of caution. Through no fault of their own, it’s only the nature of children to want to pick up, hold, and hug their cuddly companions.

Any credible expert would already advise against adopting or purchasing any dog breed to be raised by a child because they lack the maturity. This is especially important when it comes to a dog as delicate as the Maltese.

As with most dogs bred for companionship and not to perform any sort of working task, they weren’t specifically bred for intelligence and may have trouble with certain things that could come easy to other breeds, like potty training.

At the same time, they are very eager to please and reward-driven!

They are very smart animals for their diminutive size. In fact, you would have an extremely hard time finding any other animals (other than dogs) that size that also maintain that level of intellect and trainability, both tiny humans and arguably most breeds of domestic cats included.

The AKC breed standard places the Maltese between 4-6 pounds, though many other sources put a limit at 7-8. The Teacup variant averages between 3-5 pounds. He usually reaches a height between 4-6 inches. 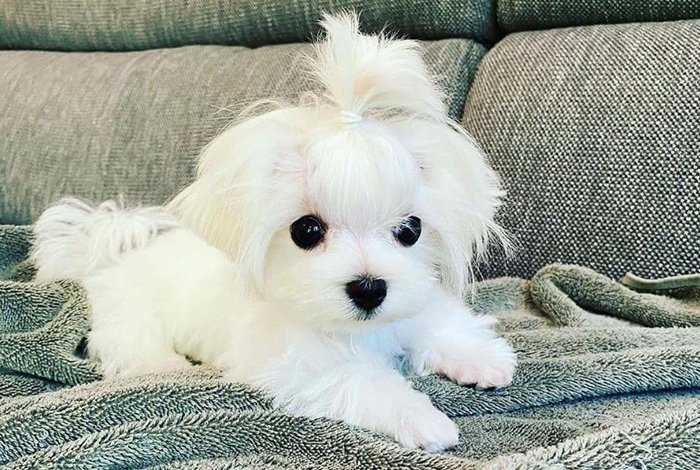 These low maintenance guys seem to be constantly happy around their people! You’ll find a constant, devoted playmate in the miniature Maltese. As the ideal lap dogs, your pets will always crave your attention!

Are Teacup Maltese Good with Kids?

The basic answer is no, but there are many aspects of that ‘no’. Teacup Maltese tend to become ‘snappy’ with smaller children and are easily injured because they are so delicate. This isn’t a dog your 4-year-old son or daughter should pick up, carry around, or tightly cuddle with and hug closely.

Since it is the simple nature of a young child to want to do those things, raising a Teacup Maltese with young children could be a poor decision.

If your child is older and past the hyperactive toddler phase, or at least old enough to understand the vulnerability of their pet, he could be a great choice. Because these are very loyal, friendly dogs and compassionate with family, they would make wonderful pets for older children!

At one time, Chihuahuas were considered the smallest toy breeds, at 3-7 pounds. Often weighing in under 4, these tiny fellows set the record!

The Teacup Maltese came into being when 17-1800s fanciers sought to make the Maltese even smaller, but the Maltese himself is so ancient no one knows his exact origins! We only have educated guesses and theories.

White is the Only Color (usually)

Set down by the breed standard, white is the only color allowed for the Maltese! Of course, other colors are possible but haven’t been accepted by major breed registries since 1913.

There is more to successful breeding than simply coupling two-parent Teacups. It can be a complicated process, but a gene pool too narrow can lead to birth defects and numerous medical issues.

There are several precautions a reputable breeder will take to ensure his pups are healthy! Because of the complexities involved in breeding, you might pay up to around $2,000 USD.

The Maltese are no stranger to fame. Celebrities like Marilyn Monroe, the infamous Mona Lisa, Halle Berry, Madonna, and more all cared for one!

With any teacup breed, you’ll find special dietary requirements you might otherwise not often see. You have the basic recommended ¼ to ½ cup of dry food per day, preferably divided into two separate meals. You want food developed for small to toy breeds your teacup can actually eat.

Then you have to consider the increased potential for weight gain. Because they aren’t going to be as active as many other dogs, they won’t burn calories at the same equivalent. Try to avoid anything too high in carbohydrates.

Many high carb foods tend to offer a lot of grains, in the form of corn or wheat. Though countless ‘grain-free’ brands exist, you want to offer some grains in your pet’s diet. ‘Grain-free’ has been linked to cardiomyopathy (heart disease), resulting from a particular amino acid deficiency.

Your little one doesn’t require nearly as much exercise as many other breeds, but some physical activity is important. For example, a 20-30 minute walk daily, or perhaps some free-play along with an enrichment (activities that focus on instinctual behaviors, thought-provoking, mentally challenging, etc.) activity time thrown in would be all the doctor ordered!

Your little one is delicate, so use care. Absolutely never use any kind of slip collar or ‘choke chain’ type of collar. In fact, a harness designed for a breed that small wouldn’t potentially apply any pressure on the trachea.

Typical double-coated breeds will shed their undercoat regularly, some ‘blowing their coats’ twice a year. They usually won’t shed their topcoat at all.

All dogs, whether they shed or not, produce dander, but these guys are among the hypoallergenic breeds out there. While you should consider lightly brushing your little one’s coat daily (or 2-3 times weekly), he isn’t going to leave clumps of fur everywhere.

Baths are recommended once every 1-2 weeks.

As with many other teacup breeds, the Teacup Maltese is susceptible to a wealth of health concerns. Any future owner who is looking for a breeder should ensure that breeder has paperwork to back necessary genetic testing. Don’t be fooled, numerous companies offer this service and it isn’t hard to locate a provider.

Assuming your little one doesn’t inherit or suffer from any of these conditions, he will enjoy a longer than average lifespan of 12-15 years! Smaller breeds in general tend to enjoy a longer lifespan than larger dogs.

Watch for ‘Back Yard Breeders’

This term is often used to describe any breeder lacking experience and knowledge. For example, if your neighbor likes dogs and decides to make some extra ‘side’ money mating their female with a friend’s dog for the first time and selling pups, they would probably fit that description.

Because of their enormous price tag (listed above), these dogs and others like it are prime targets for inexperienced breeders and ‘puppy mill’ breeders. Those unfortunate animals they sire could be especially prone to medical problems.

Many reputable breeders will have affiliations with major breed registries, like the AKC or UKC. They will have paperwork.

Is the Teacup Maltese Easy to Train?

The answer is yes and no. Training a dog always depends on the experience and knowledge of the handler, as well as correct or incorrect training methods. Likely due to the Poodle and Spaniel genetics, your Maltese is going to be one of the brightest toy breeds around!

They have a deep desire to please, convenient for any reward-based training. Still, the Teacup Maltese might have an especially difficult time with certain tasks, like potty training. This is a very small breed with an equally small bladder!

Early socialization is especially important, social skills being something many toy breeds unfortunately lack. The Maltese often doesn’t seem to realize how small and helpless he is, exhibiting the bravery of a much larger dog! This can easily end in potentially fatal conflicts with larger animals.