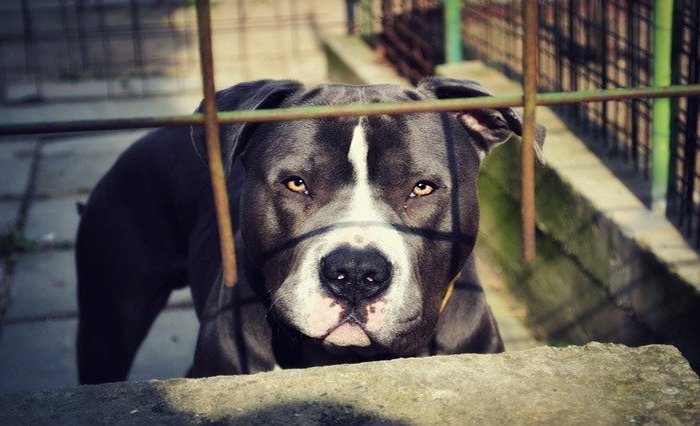 Have you ever wondered what is the toughest looking dog? Look no further!! Learn about these mean-looking dogs… 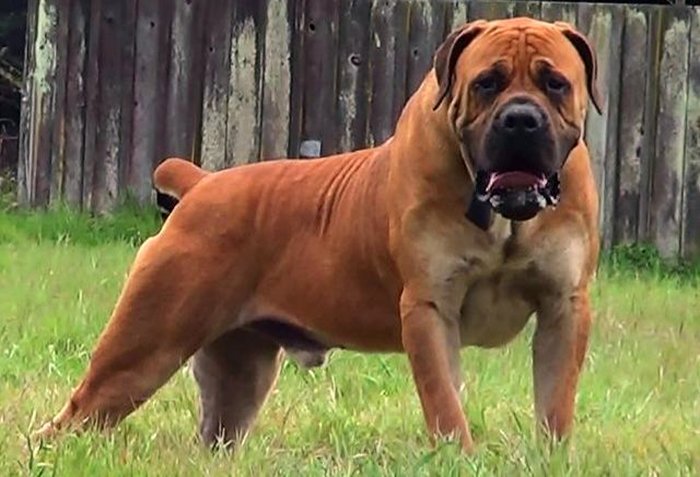 Nicknamed ‘the Gamekeeper’s Night Dog’, a Bullmastiff’s job during the mid 19th century was to guard English estates of wealthy landowners against poachers. Penalties for poaching were as severe as they come, often resulting in death; poachers would just as easily kill any landowner or worker that confronted them.

Thus, gamekeepers decided to breed a powerful dog that wouldn’t hesitate to chase down and pin any trespasser to the ground. Though these dogs risked being shot, no human is going to gladly stand his ground against a group of 130 pounds, snarling beasts. These giants would frighten the bravest poacher nearly to death, but never actually maul them.

Other mastiffs were crossed with Bulldogs at a 60/40 ratio. Since bulldogs were bred to ignore any type of pain they might experience, these Bullmastiffs were difficult to discourage.

Named after Louis Dobermann, a taxman, and German dog breeder during the 19th century, the original Doberman was larger and likely more intimidating. Such were the dangers of procuring money from those who felt they didn’t need to pay it.

This tax collector’s dog quickly gained international fame as a very effective working dog! He has a long history with both law enforcement and many major militaries of the world. Thanks to their intelligence, Dobermans are common service dogs for the disabled, just as gentle as they once were intimidating. 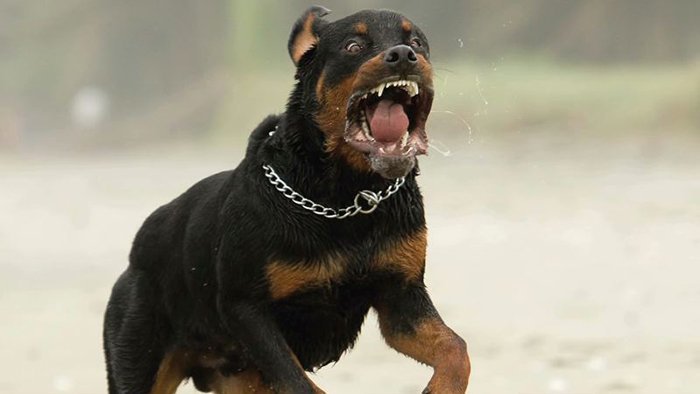 The Rottweiler of 2,000 years ago was a larger beast of a Roman champion, specializing in anything from guarding stock animals, providing protection, and competing in gladiatorial events. These were what a child imagines when he thinks of a ‘fearsome Rot’. Like the Asian Chow Chow, the Rottweiler was also once a wartime combatant.

The Rottweiler isn’t the oldest breed by a long shot, but he is probably the oldest here. Today’s Rottweiler, however, doesn’t look much like he once did. Nearly any but the most educated historians would think they were looking at two separate breeds if you sat the two side-by-side.

You’ll notice a constant theme present in several of these breeds. Nearly all of their once considerable aggression was bred out over these many years! Even the Great Dane, famously known as a ‘gentle giant’, was once a fearsome German estate guardian and wild boar hunter.

Once the violent, cruel English sport of ‘Bull-Baiting’ was outlawed in 1853, Old English Bulldogs faced a rough time and the breed nearly went extinct. Though they were also useful with livestock, Bulldogs found themselves unemployed during an age when a man’s livelihood depended on his fellow working dog, and there was no reason to care for a dog who couldn’t provide.

Of course, humans in their vast capacity for cruelty weren’t deterred. If they couldn’t match dog against bull, they would match dog against dog. Though powerful and bred with both an unbelievable ferocity and tolerance for pain, Bulldogs were too slow for these spectators. They set to crossing these powerful English Bulldogs with agile, quick terriers, giving birth to a new breed of combatant.

Some historians claim Pit bulls were used for ‘ratting’ first, which involved chasing and killing rats in a ring. Yet others claim they were first bred before bull-baiting was outlawed. Whichever the reason, they were selected for their affinity for human handlers, making the Pit-bull one of the best family dogs today (not the ferocious beasts of legend). 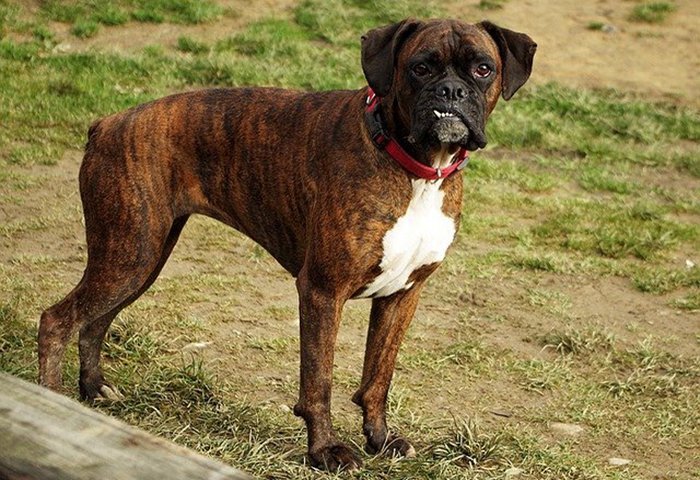 Though his ancestors happen to be 4,000-year-old war dogs of the Assyrian empire, today’s Boxer is believed to be refined from German Bullenbeissers, or bull terriers. In times of old, these bull terriers were a favorite game hunter of Germany, able to run down and hold formidable opponents.

When the German noblemen that hunted with them lost favor, English fanciers stepped in to further refine the Boxer of old. Today’s Boxer is a gentle breed, used in nearly any capacity you can imagine! 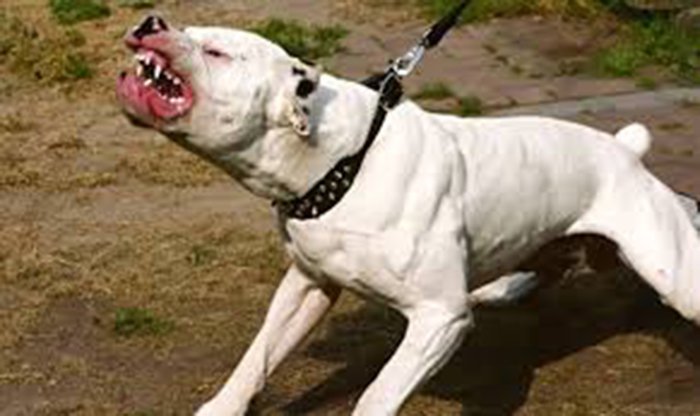 English Bulldogs are smaller with a sort of flatter, blockier head and shorter legs, plagued with a plethora of health problems. Mothers must always give birth via cesarean, never naturally because the heads are so disproportionately large. There is a high percentage of infant mortality, in addition to all of the other problems these dogs face. Some would say simply breeding English Bulldogs is an act of cruelty.

American Bulldogs are larger, sporting a more customary dog-body shape. The breed is stronger and much healthier in general. They even retain an above-average lifespan for a large dog breed, of up to 16 (10-13) years on average!

If you are wondering about those myths of aggression you’ve heard of, that is a thing of the past. After English breed fanciers rescued the original line in the mid-1800s, nearly all of the aggression was bred out. Now you have one of the friendliest, most docile breeds you’ll ever meet! 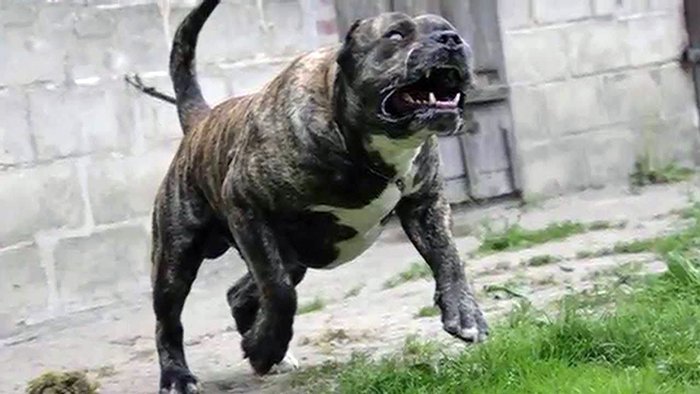 Also called the Canary Mastiff, this guy has a long history that dates back to the 15 century. In theory, dogs ‘of great size’ were found after the conquest of the Canary Islands, northwest of Africa’s coast. Some think they were brought there by Spanish conquistadors.

Dogfighting was prohibited throughout the islands during the 1940s. Yet another breed nearly died out after human cruelty couldn’t find another outlet until breeding began again in the 1970s.

Bred with the intelligence and protective instincts of a sheepdog while maintaining the mass and pain threshold of a mastiff, the Perro de Presa Canario made a spectacular guardian. 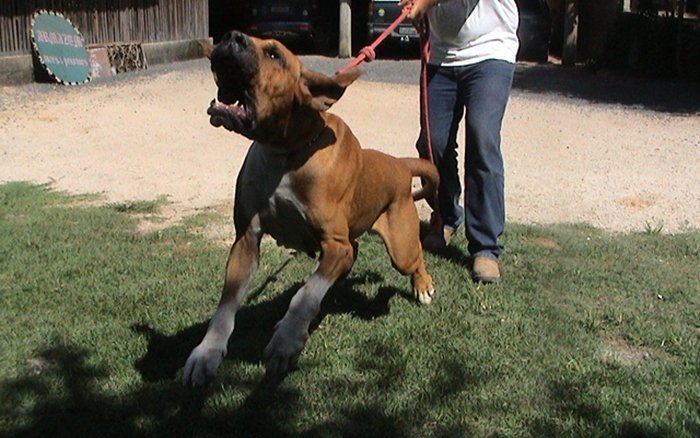 Bred to work on large Brazilian plantations, the Fila Brasileiro is another fierce guard dog. His sheer mass would send shivers down any spine.

At one time, these dogs assisted with cattle, guarded against any thieves, and protected livestock from Jaguars or other predators. Jaguars can reach a mass of 210 lbs, twice as big as the Fila, and offer a massive bite similar to the animal described below. However, dogs are social animals, while Jaguars are solitary.

He would grab his quarry by the neck until a handler arrived, and is one of the few dog breeds potential handlers should be cautious about. Unless well socialized by an experienced dog owner, he isn’t recommended as a pet. 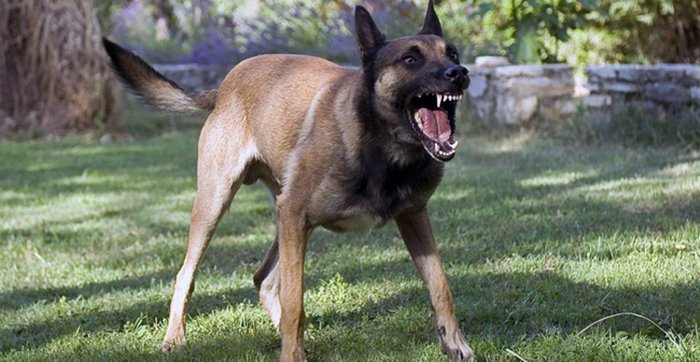 Named for the city he was first bred in, the Malinois was born to be a natural livestock dog. He’s extremely intelligent, easily trainable, and very sociable- assuming you know how to raise a dog. These guys are used across the board, from service-related tasks to military and police work to his original job of herding livestock! 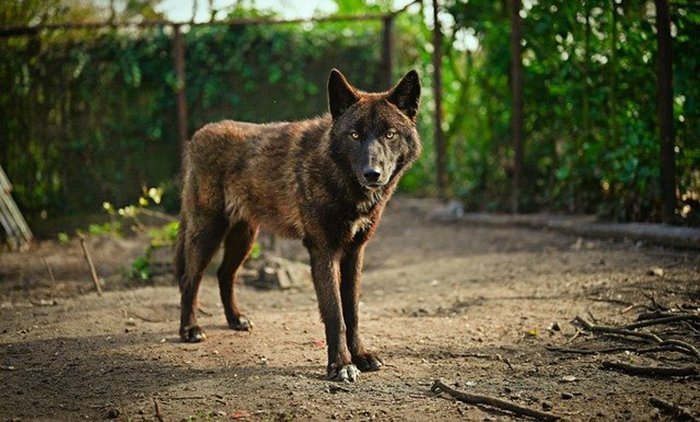 Wolves share a very close genetic lineage to dogs, having sired them through first natural selection then very gradual human adaptations about (in theory) 14 thousand years ago. Of course, this happened over countless generations, and humans didn’t selectively breed any dog at first.

Both wolves and domesticated dogs are very social animals, thriving on that social contact. Wolves are wild, unlike our dogs, all but impossible to domesticate (some very educated biologists have tried). They can behave unpredictably, which makes them dangerous to raise around humans.

These wolf behaviors are designed by nature to help the animal survive in the wild; today’s dogs were selectively bred by humans. It is illegal to breed wolves in much of the United States for that reason.

Which is the most dangerous dog?

You might say that the most dangerous dogs are those bred for aggression, like the warring Asian Chow Chow of the past, the Roman Rottweiler of 2,000 years ago (not today’s), or fighting breeds like the Presa Canario, are the ‘most dangerous dogs’. Though some breeds are genetically predisposed toward aggression, a good trainer can raise the most aggressive breed on earth to be a friendly, loving animal.

Which dog is the hardest to train?

The Wolf Dog is the most unpredictable and difficult to train. A wolf-dog hybrid might inherit such traits, making him the most unpredictable breed on our list. In order to fine-tune those traits, a breeder would have to breed multiple generations. Since breeding wolves is illegal in much of the United States, this is probably impossible.

What dog is the most aggressive?

It is the Chihuahuas of the world who tend to be the most aggressive, and we simply don’t notice because they might only weigh 10 pounds.

What dog is stronger than a pit bull?

There are countless large or giant breeds ‘stronger’ than an American Pit Bull Terrier. This breed was originally bred for his dog’s aggression, ferocity, pain tolerance, agility, and speed- not necessarily strength. People often forget he was also bred for his affinity toward human handlers and bit inhibition (ability to control bite pressure).

Thanks in part to illegal dogfighting and our negative media, the average mother might look at today’s muscular, intimidating pit, and quickly shield her children for fear of a dog attack. We have a terribly misguided perception of these dogs, imaging some fearsome beasts of legend.

Contrary to popular belief Pit-bull bits don’t exert any kind of insanely strong bite when compared to any other avg. fully grown dog. They were once very effective combatants because they would ignore pain or injuries, tearing at their opponent until they just physically couldn’t anymore, which probably meant they were going to die.

What dog has the strongest bite?

The ‘dog’ with the strongest bite in the world isn’t really a dog at all; he’s actually closer to a cat sharing some canine behaviors. A Hyena’s 1,100 psi is unbelievable for an animal 4 times his size, let alone his diminutive 120 pounds or so. This is easy enough to crush bone or impale flesh, and you can safely say severely injure anything caught in those jaws.

The avg. Hyena can exert more force than a 1500 lb. Brown Bear, just barely surpassed by a fully grown Silverback Gorilla. The avg. 320 psi for a fully grown dog of about the same size is nothing in comparison.

The Kengal, a breed of mastiff, is a livestock guardian dog bred in Turkey and said to exhibit around 700 psi of bite force. Mastiffs, in general, are believed to range around 700 psi.

Large cats will kill their prey by biting the neck, usually severing the spinal cord, which is probably why it is common for them to have such a high bite threshold in comparison to dogs of the same size.

‘Mastiff’ covers several breeds, and appear frequently on our list. The idea of the Mastiff dog is ancient, dating back to the very first dogs of Egypt or the Fertile Crescent (8,000 years ago) in Northeast Africa, otherwise known as the cradle of civilization. They are so old no historian can place their early lineage, minus artifacts depicting massive ‘Molossian’ breeds (a common ancestor).

Molossian dogs are older than the most ancient records of Ancient Egypt, depicted in images found among 8,000-year-old African cave drawings.

When we go that far back, historical records become speculation. Did dogs evolve first from wolves in eastern Asia, slowly adapting new traits to suit warmer climates as they made their way southwest with human agriculture? Was the ancient African Basenji or Egyptian Saluki really the first dogs at all, or just the first breeds we know of?

Why Is My Dog’s Nose Dry or Cracked