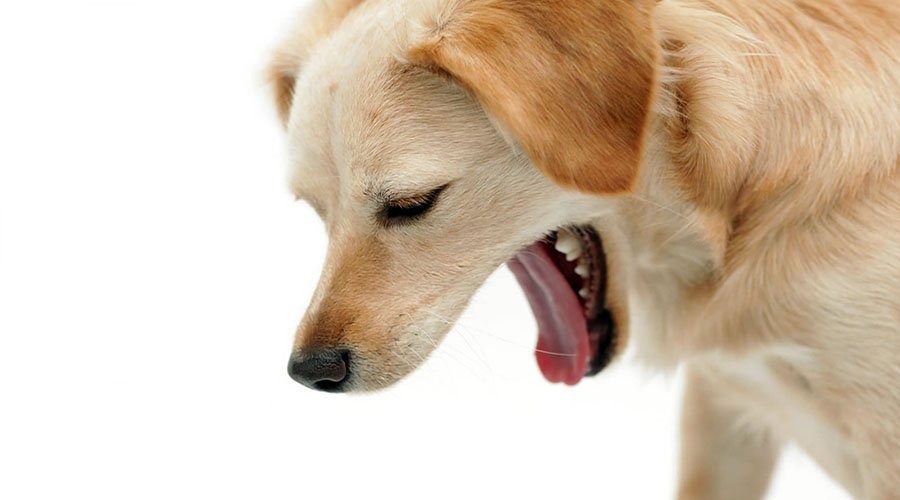 Is your dog throwing up his food shortly after he eats? As a dog owner, this can be hard to watch. Therefore it is important to understand why your dog is throwing up undigested food and what you need to do.

In this article, we will discuss why dogs often throw up undigested food and home remedies to stop vomiting. And most importantly, when you be concerned…

Is your dog Vomiting, Regurgitating, or Burping? 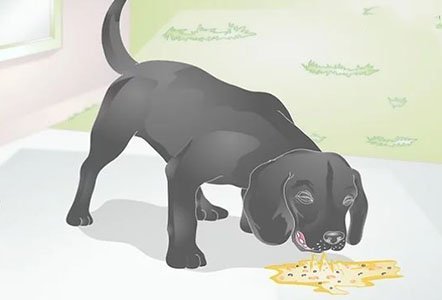 Vomiting is defined as the forced, involuntary, or voluntary emptying of the stomach through the mouth. In vomiting, the contraction occurs in the stomach muscle, and sometimes, along with undigested food, yellow bile with a sour smell appears.

Vomiting occurs due to many reasons. It usually happens when your dog eats too much or eats too fast because some dogs are naturally greedy. It may be that your dog has picked up something from the trash, or any harmful grass can cause vomiting.

If white foam comes along with vomit and it is followed by a runny nose, eye discharge, and a dry cough, then it is a sign of kennel cough.

Onions, chocolate, and grapes can cause toxicity and vomiting in dogs. Some dogs who like to dig in the trash can suffer from food poisoning and vomiting.

What causes a dog to Vomit:

Regurgitation is the expulsion of gastric juices and undigested food that rises from the esophagus to the mouth. It is a passive process and does not involve retching symptoms associated with vomiting. It usually occurs shortly after the dog ate something.

Sometimes you see that your dog regurgitates the food and then returns to eating or the puppy next to the mother ate the regurgitated food. T

his mainly happens when puppies are in the transition phase from mother’s milk to solid food and need help during this phase. The mother regurgitates at this point to provide partially digested food for her young.

What causes a dog to Regurgitate:

Some people confuse burping with regurgitation. In burping, a small amount of food comes up with the gas. Burping in dogs can occur due to a variety of reasons.

What causes a dog to Burp:

When to be concerned…

If your dog is throwing up undigested food once in a blue moon, then there is no need to panic; he will usually be back to his normal routine within a few hours. If the vomiting does not stop, then you need to understand that there is a problem with your dog.

If your dog is throwing up undigested food, it is usually just one of the followings:

Dogs sometimes eat grass after eating to induce vomiting. There is a strange habit of dogs that every time they go for a walk, they pick up all the waste, discard food, foreign matter, and even the plastic that is thrown away. They will try to eat all of these things, but their body will eventually reject them.

If your dog is throwing up undigested food and there are other symptoms along with it, you should try to understand why it is happening.

When does a vomiting dog need to visit the vet?

As mentioned, if your dog vomits occasionally, there is no need to worry, but if your pup is vomiting more than normal, it’s time to take him to the vet.

What will your vet do?

Your vet will start by trying to determine what caused your dog to throw up his undigested food and how this is affecting the dog. It would be useful if you could give your vet a sample of the vomit to enable them to determine what foreign material could be in it.

Regardless of whether it is vomiting or regurgitation, your vet will more than likely check first to ensure there is no obstruction in the dog’s digestive tract or throat, for example, a bone, sock, or any other foreign item.

Should your vet determine that the issue is regular or sudden-onset regurgitation they will try to find issues related to the stomach or esophagus. They may also look for cancer, accidental poisoning, enlarged esophagus, or gastric reflux.

If the issue is unexplained throwing up, the most urgent things to look for are dehydration and infections and, according to the American Kennel Club.

A vet may also examine your dog’s small intestine and stomach and check for diseases like:

He will look for the following signs along with vomiting…

Other related symptoms to look out for…

The reasons behind throwing up are so varied that sometimes getting a diagnosis can be tough, so it’s crucial that you give your vet as much information as you can and indicate if other signs may also be occurring.

It is important to take certain measures if your dog is vomiting undigested food immediately after eating or a few hours later. Some of the things you can do at home include