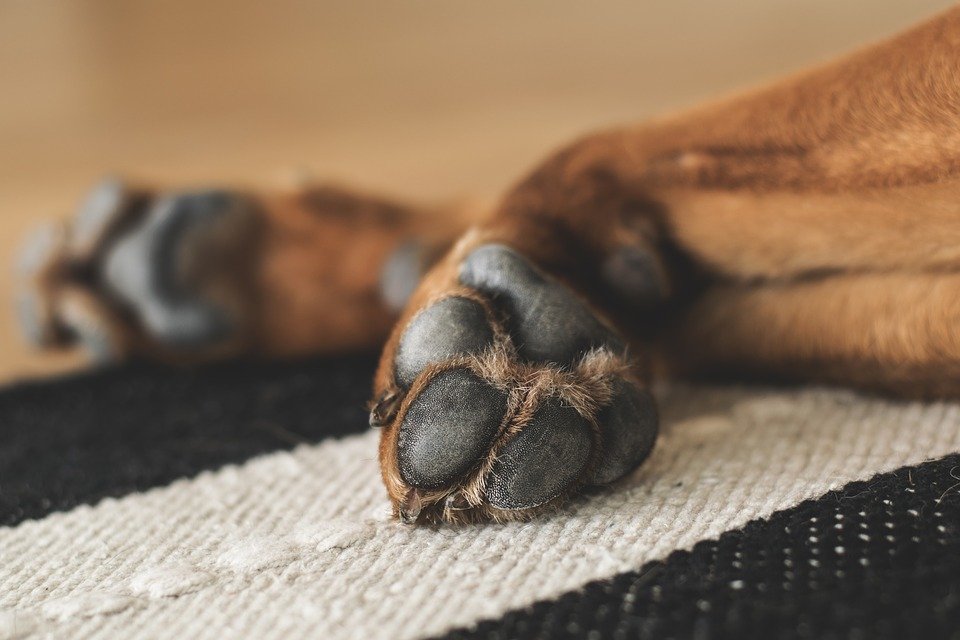 It’s common for a dog to lick their paws, however, when it happens too much there must be a problem. A dog who is constantly licking or chewing paws can be showing signs of an infection, allergies, or even boredom.

Paws are very sensitive and even the slightest infection can cause them to crack and produce a lot of discomforts. Besides the nose, dogs do sweat from the bottom of their feet. This creates conditions that are very conducive for bacteria and pests to flourish and cause the paws to itch.

Apart from being irritating, the licking of paws can infect the dog with diseases picked up as they were walking. Luckily you can easily get rid of this habit at home using simple, affordable, and non-toxic remedies. Alternatively, If you are in a hurry you may want to consider a skin balm created specifically for dogs.

Here is a list of 8 remedies that can be used to relieve itchiness and cracked dog paws.

Vinegar can cure many dog ailments including those on the paws. Vinegar is diluted acetic acid that is very effective in killing bacteria but at the same time, it is not corrosive to the dog. Fungus is also a major cause of paw infection that may cause your dog to chew their paws. Vinegar has a lot of anti-fungal properties that stop such infections.

Simply mix two cups of warm water and a cup of vinegar in a basin and soak the dog’s paws in the water for five minutes. Repeat this twice a day for a week or until the dog stops licking its paw. Baking soda has a lot of uses in and out of the kitchen including treating itchy dog skin and paws. It has a lot of anti-inflammatory properties that reduce itchiness and swelling.

Make a paste using one spoon of baking soda and apply on the paws and then wash after a few hours. Baking soda is easily available and does harm the dog.

As your dog walks it does get a lot of small bruises on the paws. Germs and fungus may take this opportunity and invade your dog’s paws and cause itchiness. Iodine has anti-bacterial and anti-fungal properties that disinfect the paws and stop the itchiness.

Besides, that vitamin E is good for your dog’s heart, liver and improves the immune system of the dog. You simply extract some oil from the capsules and apply it to your dog’s paws until the paws stop drying and cracking.

As stated above injuries on dog paws are very common. Bacteria may attack these wounds and start causing them to itch. Epsom salt has anti-bacterial properties in it that help to disinfect dog paws and relieve them from itchiness.

Dilute some Epsom salt in warm water and soak the paws in the solution for a few minutes and then wipe the paws. Repeat this until you get your desired results. However, do not let your dog drink the water because it may cause stomach upset.

Honey has a lot of properties that are beneficial to a dog. Honey moisturizes and softens dry paws hence helps to soothe itching paws. Honey is a good anti-oxidant that helps in the removal of toxins from cells there for encouraging the regeneration of new cells. It has antibacterial properties that kill bacteria and keep infections on the paws at bay.

Honey also helps in treating different types of allergies including those that cause paw itchiness. Simply apply raw honey on the paws or you could mix it with vinegar or baking soda in order to get better results.

Chamomile can be mixed with vinegar and used to soak the dog’s paws. It can also be mixed into a dog’s diet.

Dry paws cause dogs to lick paws in order to relieve itchiness. Coconut oil contains fatty oils that help to reduce this dryness and moisturizes the paws. It can be used on wounds to kill bacteria and promotes faster healing of wounds because of its antibacterial properties. Coconut oil is not harmful to dogs and can be used to treat many other dog ailments.

Coconut oil can be mixed with other remedies such as baking soda or vinegar in order to get desired results. It is simply applied on the paws or can be mixed in a dog’s bath water or even diet.

They say prevention is better than cure. If your dog is constantly putting their paw on you then this could be his way of telling you his paws need attention. By cleaning and drying your dog’s paws regularly you ensure that you do not create conducive conditions for bacteria or fungus to flourish. You need to also physically inspect the paws for any solid particle that may be causing discomfort to your dog.

Another thing people need to be aware of is allergies because they also cause itchiness and cause dogs to chew on their paws. In case you try all forms of home remedy and they fail, you are advised to seek help from a qualified veterinary doctor.

Why do dogs chew on their feet?

Allergic skin disease is the most common reason why canines lick and chew their feet on a chronic basis. Food allergies, in particular, are typically the culprit, and secondary infections from yeast and bacteria can further exacerbate the behavior.

How do I know if my dog has a yeast infection on his paws?

Yeast infections (yeast dermatitis) often affect the skin between a dog’s toes and other skin folds, as seen in itching, redness, a greasy discharge, and occasionally a brown discoloration of the dog’s toenails. You may notice excessive licking and red toenail beds in your dog’s feet, which comes from the licking.

Can yeast infection kill a dog?

Systemic Yeast Infections In Dogs. The Yeast genus has over 1500 species and new strains are discovered every day. Some of these species are beneficial and some are detrimental to Canines. … Antibiotics will kill all beneficial bacteria in the gut prolonging the pH imbalance and the yeast infection.

Should dogs sleep on your bed?

Go ahead and sleep with your dog—it’s perfectly safe, as long as you are both healthy. In fact, sharing your bedroom with your canine companion—as long as he isn’t under the covers—may actually improve your sleep, according to recent research published by Mayo Clinic Proceedings.

Will coconut oil help my dog with itchy skin?

Topical Benefits – It’s been known to help skin conditions like hot spots, bites, stings, or itchy, dry skin. Shampoos made with organic oils such as coconut oil can improve damaged skin and reduce allergens. Some pet owners have even made a DIY paw balm with coconut oil as one of the ingredients.

How do dogs get ringworm?